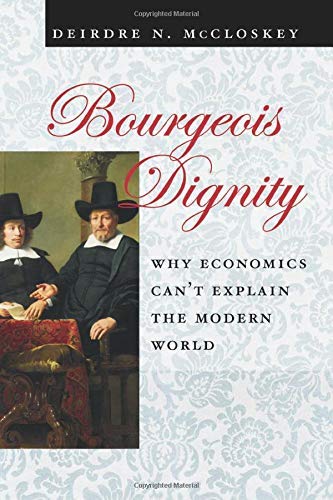 The second book in McCloskey’s famous “Bourgeois” trilogy, arguing that ideas were the cause of the “Great Enrichment” that began in the 19th century: specifically, a new “dignity and liberty for ordinary people”, and especially for innovators.

The book not only argues for this thesis, but systematically reviews every other theory that has been proposed for the cause of the Industrial Revolution and the subsequent dramatic increase (by at least a factor of sixteen, and arguably a factor of thirty) in per-capita incomes in the industrialized world. Some of the purported causes argued against include: “thrift”, or savings, mere accumulation of capital; the accumulation of human capital, that is, an increase in education; an unusual episode of “greed”; colonialism; geographic factors, including the distribution of natural resources, such as coal; trade alone; improved institutions, including property rights; even science. Many of these cases could explain an improvement of ten percent or even fifty percent, but what must be explained is an improvement of more than an order of magnitude.

All of McCloskey’s work is extremely thoroughly researched (I continually get the impression that she has read literally everything in not only economics but also in history, literature, and philosophy) and written with style and humor. She is also one of the few writers in her field who take seriously the power of ideas in economics and in history. Recommended for any serious student of progress.