Here are interviews I’ve given on other people’s shows. See also the speaker series for Progress Studies for Young Scholars and my “Doing Better” series for the Interintellect.

In reverse chronological order (most recent at the top):

Highlighter is an social network that lets you share and discuss snippets of what you’re reading. You can follow books as well as people. Founder David King hosted a “town hall” discussion with me on the relationship between science and invention, “basic” vs. “applied” research, and progress in general.

In this episode, we discuss the forces that drove civilization to reach the heights of prosperity that we see today, and we ask why it’s taken for granted, instead of revered.

A new podcast by a CS student at UT Austin. Topics included the great stagnation, prescriptive vs descriptive optimism, and the linear model of innovation.

Topics include: asymmetric risk in funding progress, how celebrations of progress have changed, and how to use progress for good.

Listen to “Progress Studies in 2020 with Jason Crawford” on Spreaker.

The Post-Lean Institute and SRI International co-sponsored this interview with me titled “The Path to Progress: Building the Future Faster.” Get the video here (free registration required). Intro begins about 4 minutes in, and the interview itself begins at about 06:30. 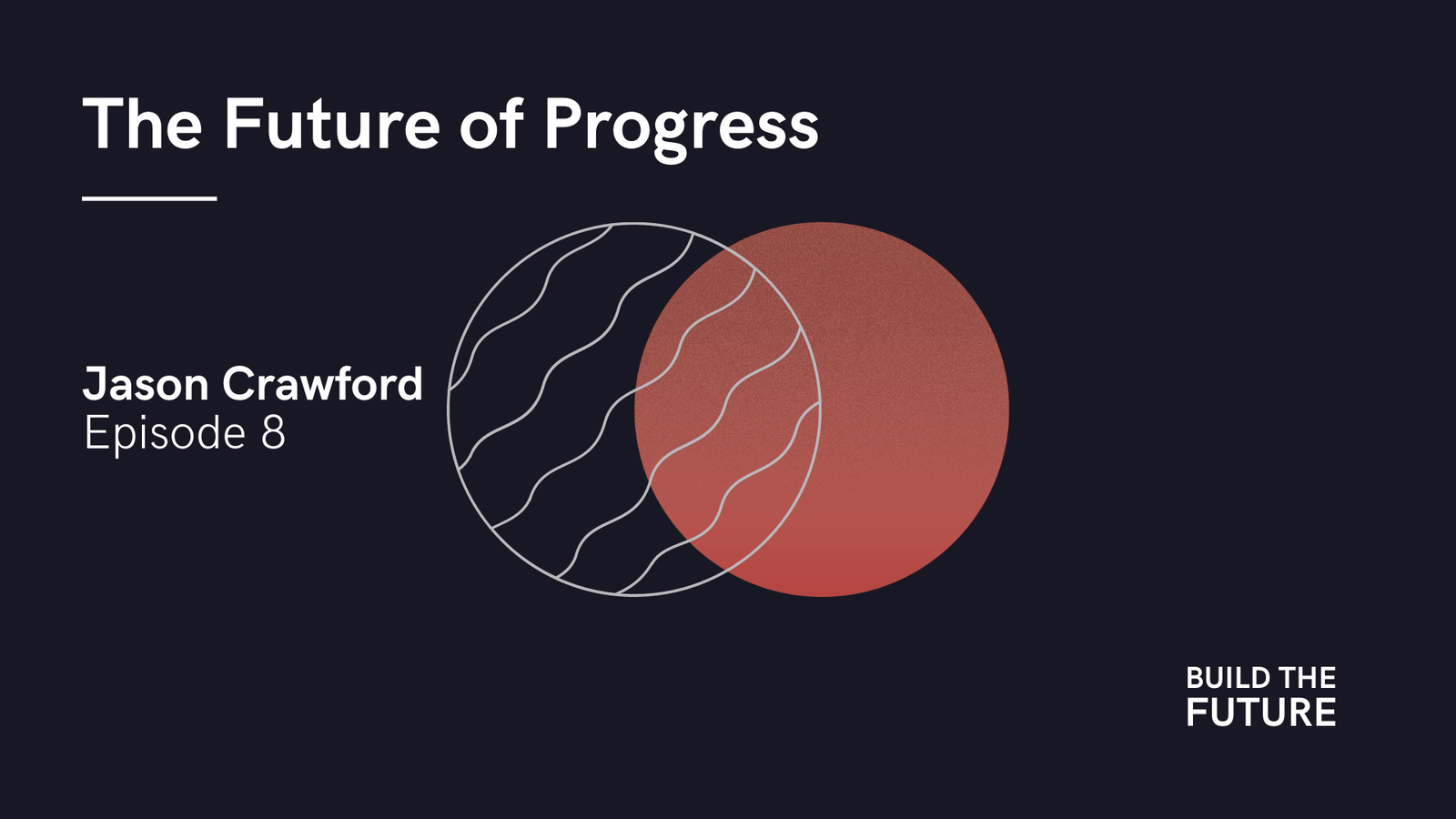 We talk with Jason about the three layers of progress, how much better the world is now vs. 200 years ago, misconceptions about the space race, knowledge creation, prescriptive optimism (including a take on COVID), and much more!

Listen on the show page, Apple, or Spotify.

Salon of the Refused

Topics include: the stagnation hypothesis, the notion of a “culture of achievement”, and why the ancient Greeks didn’t think science would improve technology.

In addition to the usual topics we got a bit into my evolving views on the major drivers of progress and where we might be falling short today.

“Never has there been a better time to be alive in human history.” So claims the opening line of this podcast.

Guest Jason Crawford delivers an overwhelming case to back it up–which is his business. As a writer on the history of technology and industry, his expertise and encyclopedic ability to highlight example after example of real-world progress in the past centuries, decades, and years will stun you. As a thinker and writer on the philosophy of human progress, he helps reinforce Matthew’s desperate calls to look, see, and appreciate how good we’ve all got it.

You may also learn about Jason’s promising new Progress Studies for Young Scholars program, the importance of funding in the realization of progress, and of evaluating various funding models to ensure optimal allocation of resources. On this last, hear Jason defend his bold claim that: “Anything that can be for-profit ought to be.”

In this talk, I gave an introduction to the idea of progress studies and to the progress community/movement. I explained some of the intellectual precursors and adjacent movements, and concluded with a bit on who to follow and what might be the future of the progress movement.

An interview by Michael Strong, founder of the high school Academy of Thought and Industry. Topic include tinkerers vs. scientists, the role of institutions, philanthropy, hazards of technology, and the progress movement itself.

Progress studies, “natural resources”, the relationship of energy to the Industrial Revolution, culture and progress, pollution, property rights, and more.

“Progress” sounds like a good thing – in fact it’s almost embedded in the definition of the word. However, as a mad-at-the-world, angst-ridden teen, I was opposed to progress. Pretty funny how that works out.

Jason Crawford has been studying the stories behind some of our most game-changing yet under-appreciated innovations like the bicycle, the process of refining steel, and why we use alternating current in our electrical grids.⁠ And, he’s been posting his finds on his blog The Roots of Progress.

Jason and I have a conversation in which we disabuse my 16-year-old self of some misguided beliefs, and we also dig into both the small-scale and large-scale dynamics or our societies that actually stimulate innovation.

Nick: What do you think you could learn from when you’re actually engaging physically with the traditional material processes?

Jason: There’s a lot of things you can learn. I mean, the reason I took the weaving class was that I wanted to understand how a loom works and I figured the best way to understand it would be to use one and to learn how to use one. The first time I looked at even a simple handloom, it just seemed super complicated. I was at this machine thinking “Why does it have all these parts? Why does it have all these pieces and all these things going everywhere?” I couldn’t quite grasp the complexity of it. Now, once I’ve actually used one, I now know what every part is, and how they work together.

But another thing I’ve gotten from doing these crafts is just a sense of the challenge. I took a spinning class, so I had wool that had been carded and straightened for me, but had not been spun into thread. And, I actually spun thread on a drop spindle. One of the things that drove home for me was just how much of a skill it is, in your motor skill and muscle memory. If you’re a beginner like I was and you’re spinning your first thread, your thread sucks. It’s really poor quality. It’s super lumpy. It has a really inconsistent thickness. It’s the kind of thing where you look at it and you’re like, “Oh God, I would not want to make any cloth out of this crappy piece of thread that I just spun.” It really gives you an appreciation for how much skill people must have built up and how much human capital was required.

Read the transcript (no audio).

Jason is a rationalist to the core and in this discussion, we discussed the meta behind his work more than he traditionally covers. We talked about history, his beliefs and background, his motivations, and the ways that the progress movement may evolve. We also covered some of the tactical work he’s done over the past 3 years. 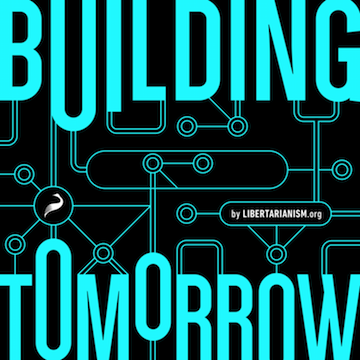 It’s easy to assume that things naturally improve. After all, in our lifetimes technology has advanced, life expectancies have risen, and standards of living have improved. Yet in historical terms, progress is a relatively new phenomenon, only invented a few centuries ago. And the danger is that if we take the idea of progress for granted, we might slow or even reverse the rate of progress. That would be a disaster given that we have an obligation to leave a society to future generations that is in better shape than we received it. Technologist Jason Crawford joins the show to talk about the ethical obligation to pursue progress.

Listen or read the transcript on the show page or find it on iTunes.

Ben has thought deeply about many topics related to progress, and in this interview, we were able to get straight to the heart of many issues. In particular, we covered the importance of funding mechanisms, the effect of culture, and how to build a culture of progress. Recommended. 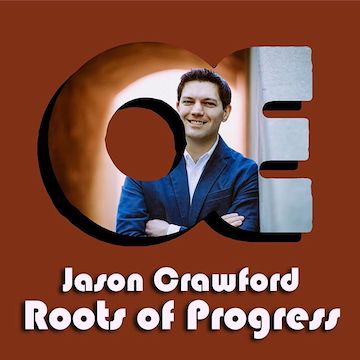 Caleb is an old friend and we chatted about progress and perfectionism. Listen on the show page.

Discussed stagnation and low-hanging fruit; lines of progress that were cut off, such as in insecticides, nuclear power, and supersonic passenger jets; and the ideas of free will and agency and their relation to progress.

The Troubadour typically covers the arts; this was a wide-ranging conversation at the intersection (or perhaps the union?) of my and Kirk’s areas. In addition to some of my usual topics, we touched on progress in ancient Greece, and the relation of art to progress. Watch it on Facebook.

A long, involved conversation; we went deep on issues of political and social philosophy.

In addition to many topics familiar to readers of this blog, this one touches on my own research process, and what someone can take away from progress studies if they are interested in contributing to human progress itself.

This one got more philosophical than usual and covered more of human pre-history. It was fun, check out the video above or the audio version on Fireside.fm.

Listen to “The Roots of Progress with Robert Tracinski and Jason Crawford” on Spreaker.

Covers everything from “sustainability” to what it felt like to live under the threat of nuclear annihilation during the Cold War.